Jiang Zhaihua (left), founder of Sinobake Vocational Training School, shows a set of Luban padlocks made from bread and a cookie in the shape of the WorldSkills Shanghai logo.

The 46th WorldSkills Competition was promoted at a recent exhibition in Jing’an District to show the development of local skills.

At the exhibition, some skills that will be showcased by competitors from all over the world during the competition in October next year were presented. These included displays in the fields of bakery, floristry, pastry, fashion technology, hairdressing and electronics.

Jiang Zhaihua, founder of Sinobake Vocational Training School, and her team showcased various types of pastries at their booth, including bread and cookies in the shapes of the WorldSkills Shanghai logo and Luban locks.

A Luban lock is a kind of tenon and mortise structure held in the mascots of the 46th World Trades Competition to demonstrate the craftsmanship of traditional Chinese carpentry.

“As the WorldSkills competition arrives in Shanghai next year, I would like to add WorldSkills elements to our baking today,” Jiang said. 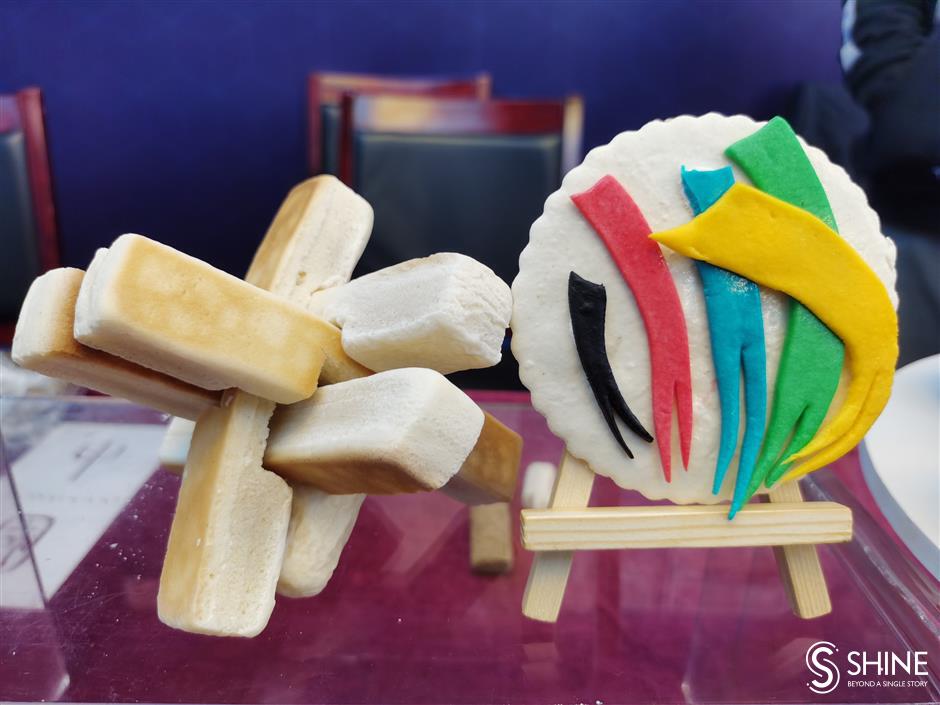 Jiang said that baking is a kind of Western skill, but it has become a booming industry in China.

“Today, it is a kind of lifestyle for the Chinese to have bread for breakfast and cakes for important occasions such as weddings and birthdays,” she said. “Some people would like to learn to bake for personal benefit or for the health of family members, while others may start their own bakery after learning this skill, which can promote employment in our society.” 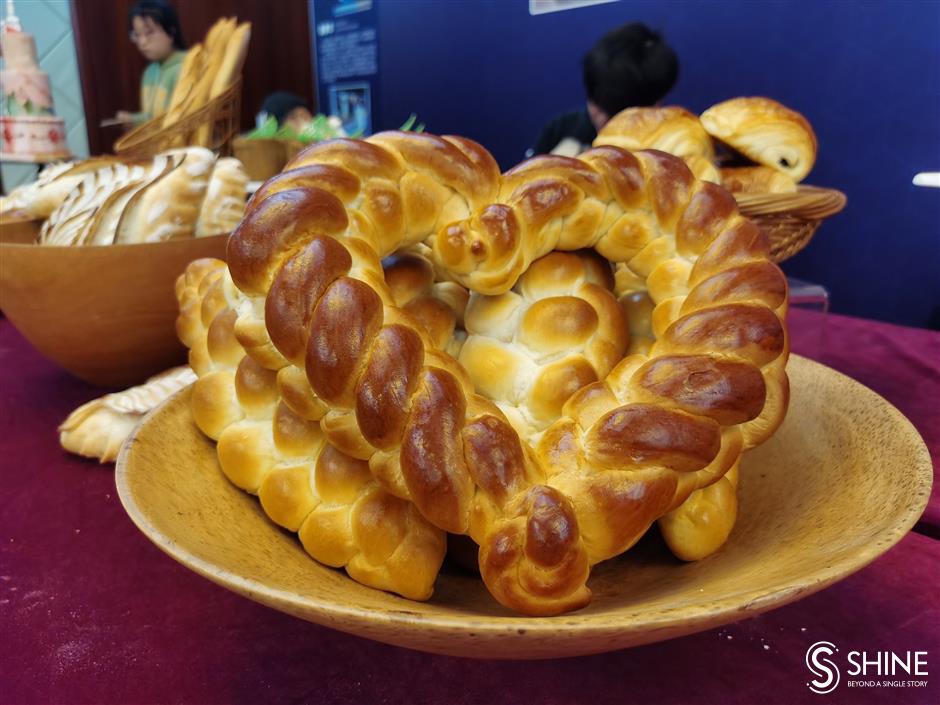 Various kinds of bread on display.

Jiang was a university student of English and dreamed of becoming a diplomat. But after graduation, she joined an American company that imports American agricultural products into China, some of which are used in baking.

During her job, she learned baking and founded her bakery training business in 2017, as she saw a lack of bakery schools in China.

By cooperating with overseas baking and cooking schools, his company offers courses from other countries to China, and also brings Chinese bakers abroad for short-term training.

In 2019, she brought her students to represent China at the International Young Bakers Competition and brought home a first and second prize for individuals and a first prize for the national team.

His company is also involved in training local vocational school students for nominations for the 46th WorldSkills Competition. 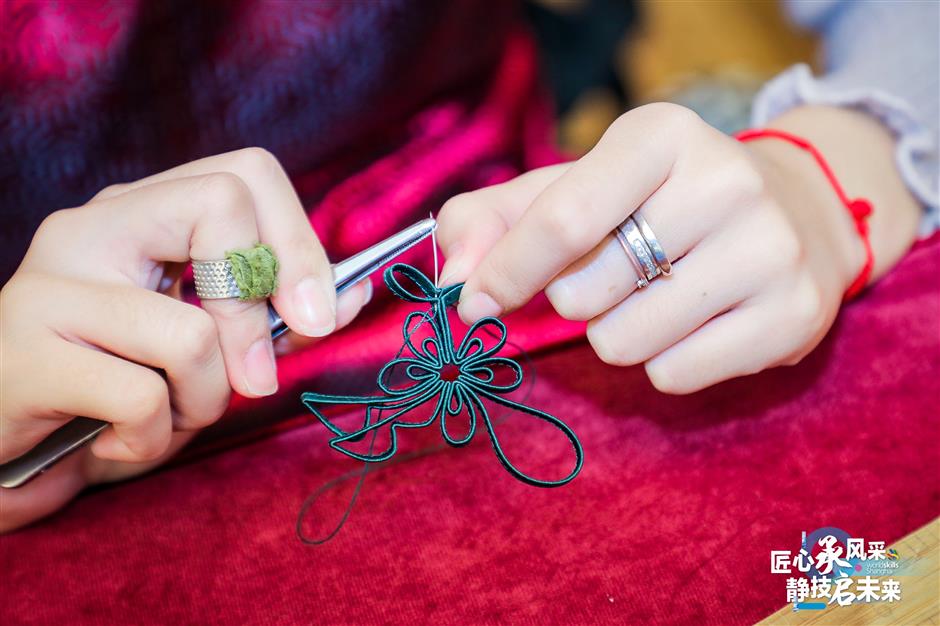 “The bakery is from the West and Chinese competitors need to learn about more varieties of bread to meet the tough challenges of competitions,” she said. “For example, at the WorldSkills 2019 competition in Kazan, Russia, competitors had to bake a kind of brown bread with rye, which is popular in Germany but rarely seen in China. The bread is sour and hard, but the Chinese prefer it sweet. and soft bread. “

China won a bronze prize in this competition.

The 46th WorldSkills competition will be held for the first time on the Chinese mainland from October 12 to 17 with Shanghai as the host city. Both the country and the city take advantage of this to promote public respect for qualified people and awareness of the importance of skills in social and economic development.

A series of activities were organized to promote competition, improve vocational training and honor qualified people.

Jiang was honored as a national skill master and obtained sponsorship from the Jing’an District government.

In the past three years, the Jing’an government has trained more than 200,000 workers as part of a skills promotion campaign. Two training bases have been established in the district. A total of 68 qualified people have won accolades, including special allocation from the state council and titles such as skill masters at district, city and national levels.

[ad_1] Download logo US Government Exchange Alumni are at the forefront of promoting STEM education and implementing programs to encourage Nigerian women and girls to pursue education and careers in the fields technologies. Alumni of the 2021 US government-sponsored TechWomen program on Monday concluded a STEM mentorship program called “EduChamps” for 30 teenage girls from […]

Mooney on chemistry with Fields: We were ‘drafted here for a reason’

[ad_1] Wide receiver Darnell Mooney joined the Chicago Bears when they selected him in the fifth round of the 2020 draft, then had a breakout 2021 season, much of which he spent catching passes thrown by the rookie quarterback Justin Fields. By ESPN stats, Mooney had team highs of 81 catches, 140 targets, 1,055 receiving […]

[ad_1] LUBBOCK, Texas – Texas Tech Seniors Center Dawson deaton and senior defensive back DaMarcus Fields have accepted invitations to play in the 97th annual East-West Shrine Bowl, game organizers said Thursday afternoon. This is the second season in a row that a Red Raider has appeared in the bowl as Zech McPhearson was selected […]